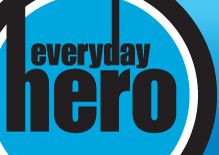 A red letter day today.  Thanks to Bill K of Canberra – and everyone else who has donated of course – I have now made my minimum $2,500 in donations.  And not before time too with the official start in Tenterfield now only 31 days away.  That’s right, 31 and I will be counting down every single day until then!

The overall total for the team on Everyday Hero is currently at $68,816 with offline fundraising probably not far off that amount either.  The overall target of at least $150,000 raised looks more than achievable, a huge outcome!

Another post or two will be made available in the coming days as the work I have been doing on my Yamaha Road Star has now been completed also.  It’s a different looking bike to a few months ago that’s for sure.

The first is thanks to Renny and Karyn of Canberra – and all others who have donated – I have cracked the $1,000 mark on Everyday Hero.  This means I’m over a third of the way to the minimum goal of $2,500 with six months still to go.

And the second is that the same donation – plus all the other wonderful people who have donated – has taken the Ride Around Australia Everyday Hero “Team“ over the $10,000 mark to a total of $10,230!

There’s no doubt more has been raised externally to Everyday Hero, but it is wonderful to see that number up there for the world to see.

Thanks to Jeff D of Canberra – and everyone else who has donated so far – I have now reached the $500 mark in donations for the Steven Walter Foundation. There is still quite a ways to go to reach the minimum amount of $2,500 but I have very confidence the goal can be acheived.

If you would like to make a donation to the “Answers for Kids Cancer” program you can do so at my Everyday Hero Fundraising Page. Donations above $2 are tax deductible for Australians.

I keep saying what a great adventure and experience the Ride Around Australia trip is going to be, but of course there is a serious side to why we’re doing this.

Neuroblastoma, a rare and aggressive disease, is responsible for around 15% of cancer related deaths in children.  Sienna Hoffmann was diagnosed with this cancer in March 2008 and despite intense treatments she relapsed twice. According to an article at the Sydney Morning Herald published in January 2010 doctors have given Sienna less than six months to live.

Sadly, the Steven Walter Foundation advises that Sienna has since passed away after the article was published. It’s stories like Sienna’s that make the Steven Walter Foundation even more determined towards achieving the goal of curing 100% of children with cancer.  It also brings home to me the seriousness behind what we are are doing and how important it is to be raising money towards the Children’s Cancer Institute Australia (CCIA). I only hope I have the strength to carry the weight of these small and beautiful angels with me around Australia on my motorbike.

A gala dinner will be held at the Kirribilli Club on March 18 2010 to raise awareness and funding for neuroblastoma with all proceeds going to the Children’s Cancer Institute Australia.  Contact details are available at the bottom of the SMH article.

All of a sudden the trip has gotten a little more real, but let me back up a little.

In 2008 I went on my first Snowy Ride for the Steven Walter Foundation (SWF) and had a great time.  Early in 2009 I received some information in the mail from SWF talking about expressions of interest for a ride around Australia in 2010.  Certainly sounded interesting but at the time I dismissed it as un-doable.

However despite thinking I had decided not to do the trip, the idea was always in the back of my mind, percolating away.  Seriously, what a great adventure it would be; although getting around this country on a motorbike is usually one of those things on the list to do one day like owning a Ferrari, or catching one of Branson’s space flights…

Then around the middle of 2009 another update appeared and suddenly I find myself considering the trip in earnest: got the bike, got the time off available, got the funds – why the hell not?

So after many discussions with my very understanding wife – and nights of pouring over Google Maps to see what kind of trip it would look like – I bit the bullet this morning and transferred my deposit (registration fee) to SWF.  I still have until the end of November 2009 to back out and get my deposit back, but I don’t think that is going to happen.  I will be riding around Australia.

Yeah, it has gotten a little bit real.