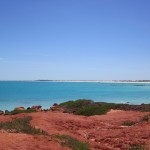 So we have reached Broome and now it was time to have a break.  And a forced break is just about what it was.  We got to Broome on Friday afternoon, Saturday saw shops shutting up at 12 and Sunday the town was practically empty.  I’ve mentioned it before but we got here in the low season so a lot of the normal activities and tours are suspended.  Heck, I was even after another massage but struck out with either no-one operating or they were out of town.

There are a couple of pubs in town and plenty of jewellery shops where you can buy pearls, either on their own or already set into something nice.  Broome was settled as a pearling port some 100 years ago and the industry continues to this day.  It’s quite the cultural mix in Broome from the people who came here to find their fortune.  During the peak season the town is thick with Grey Nomads and their migrations around this country.  Much like our own migration albeit theirs is at a significantly slower pace.

I enjoyed walking the main street of Broome which was only a short stroll from our motel.  We were able to go down for coffee, or lunch, dinner, a drink or whatever took our fancy. I also went for a wander along Cable Beach and took a short swim.  The water was so warm and I would have spent much longer there than I wanted except for the fact that I had caught quite a bit of sun the day before and didn’t need to burn any further.

The most notable thing for me in Broome was the final night when a number of us went down to Cable Beach with our motorcycles to watch the sunset.  It is the done thing with the beach thickly covered in 4WDs and tourists being led on the back of camels – all waiting for the burning sun to kiss the sea.  I hung about with Banno till it was dark and we got some great shots of the bikes and just enjoyed the sunset.  With the Boab tree it was one of the more memorable things I have done on this trip so far.

Additionally the last night saw Xavier Rudd (a crooner of note, I am told) playing at our motel which resulted in a lot of the facilities being made unavailable – namely the bar. And when we returned from Cable Beach the area was thick with cars and the sound of bass notes on the air. Not looking forward to another roast dinner (yes you can get tired of them) I got some Chinese and retired to my room with a bottle of red.

Speaking of food, some readers may have noticed a lack of culinary commentary for this trip.  I was actually keen to try some things different during this ride, like kangaroo steaks, crocodile skewers or emu burgers.  But the fact is most of the food we have come across so far has been of convenience.  Either traveller’s tucker at roadhouses along the highway, or the ever present bain-maries full of roast meat, port, potatoes and cheesy cauliflower at each motel we have stayed at.  I’ve actually skipped out on breakfast at a number of the stops preferring to grab a quick sandwich down the road.

If you think it seems like I didn’t do a lot in Broome you would be right.  Other than some walks, a dip or two in the pool, catching up on corrospondance I didn’t do much at all.  And it was good.  After close to 7,000kms in less than two weeks I needed a break and seeing as we have a day of 870kms coming up on the Monday it was sensible to not do any extended riding. We’ve been told the roads ahead aren’t exactly awe inspiring and after the roads on the way to Broome it is hard to believe aything could stack up to that any time soon while we are on the highway.

Hi, my name is Glenn Martin and in October 2010 I’ll be taking part in the Steven Walter Foundation “Ride Around Australia”. All participants are being asked to raise at least $2,500 to donate to the Steven Walter Foundation that goes to research into childhood cancer. I’m currently in my 30s, an IT professional living in Canberra Australia for the past 15 years or so. I’ve ridden motorbikes for 20 years and for the last 10 years my ride has been a ‘99 Yamaha Road Star, a big Japanese 1600cc V-Twin cruiser. View all posts by Toasty